In this research, I look into several different narratives as well as narrative styles in order to get an idea of how the story for my game should be and what it should include. 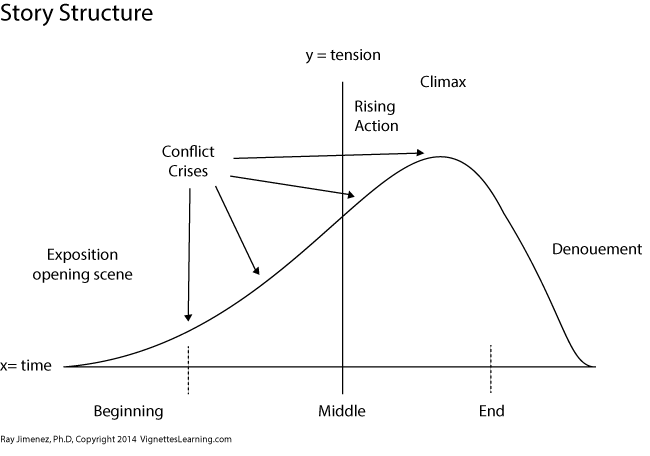 The first thing I looked into was basic story structure. I found this useful graph on Google Images and decided to use it as it explains the most basic elements of narrative building quite well and will be useful for when I write the narrative for my game. From this, I can gather that stories are made up of several key parts:

If the narrative of my game is to be of a good standard, it would be wise to incorporate most of if not all of these elements. The game should begin at a low action point and then slowly rise, having several conflicts throughout the story before the climax. These should be resolves by the end in order to give the player satisfaction upon completing it.
I will now look at several existing story structures that I came across during my research, that I found interesting and that could be influential when I write the narrative for my game.

This is the first of the interesting story structures I came across. The Walking Dead is a videogame that uses the story as its main mechanic. The player makes choices for the characters that determine certain outcomes in the overall narrative. For example, if the characters in the game are attacked by zombies, the player can choose what the characters should do in response (i.e. run, fend them off etc.). Their decision can then have a massive impact on the direction in which the narrative goes, for example one of the characters could die, the group could become trapped or they could lose all their supplies.

The game utilises a very interesting method of storytelling, and is perhaps something that I could incorporate into my game. Upon further research into this style of narrative, I came across a website entitled Twinery. Its purpose is to allow story writers to tell nonlinear, branching tales just like The Walking Dead. It may be a good idea to use this tool when writing my own. 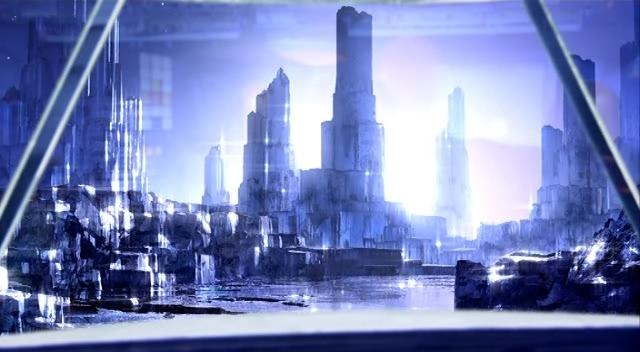 I have visited Doctor Who previously when researching for my game. There was a monster in the show that I thought could inspire the Unseen, as there were elements of it (shadowy, skulls etc.) that I thought would be interesting to incorporate. The ideas I got from the monster were ultimately not used for the Unseen in the end (as I decided the other creature ideas were more interesting) but Doctor Who is still a good area for research, particularly of the genre that my game is. So I decided to return to it, and I found a great deal of ideas.

The Doctor Who episode called Midnight is about a group of people who go exploring on a diamond planet (see above) using a bus-style vehicle. They know there is no life on the planet because the Sun’s rays are too powerful for there to be any. However, as they explore something starts banging on the roof of the vehicle. The lights then go out and one of the crew members starts acting strangely, repeating everything said to them. It then becomes clear that a creature from outside has taken over the crew member. The creature is defeated in the end as one of the other crew members sacrifices themselves by taking the infected member outside into the deadly Sun’s rays, presumably killing them both.

What interests me the most about this episode is how little is revealed about the creature. You never knew what it looked like, what it wanted, or what it actually was. This is the sort of idea I want to use for the Unseen. Other than finding out they are not native to the planet, I don’t want to reveal anything else about them to the player. One of the best things about the Midnight creature and the monster from Alien was how much they are shrouded in mystery, as it makes the player think and be curious about them. Since the game will be largely mystery-based, this seems like a very good idea to incorporate around the Unseen.

I looked into several games for this, and Arkham Knight was the best example I came across. The game I am making will incorporate stealth majorly as several of the main mechanics are built around it. Therefore it makes sense to incorporate elements of the stealth into the story. In Arkham Knight, there are several story locations where stealth is a necessity. Batman (the titular character) must move around without being seen and take out various thugs and henchmen in order to proceed to the next location. Stealth is a big part of Arkham Knight, and it is incoporated into the main story very well.

There will most likely be several story-based locations in my game. One of the main ideas I came up with previously is that the player will need to move around to collect parts to fix their spaceship. There will therefore be several locations the player will need to travel to, and it makes sense to incorporate story elements there. For example, there could be a large area where the Unseen are roaming around and stealth will be a necessity in order to navigate the area and reach whatever goal the player needs to reach. This would be a good way of incorporating some of the main mechanics into the story.

This game became very famous overnight this year. It is an open-universe exploration game, where the player owns a spaceship and goes around mining and collecting bounties for profit. It had a fairly large fanbase before the Event but afterwards it got a lot of media attention.

In Elite Dangerous, there are no aliens. All the characters are human. there have been various hints to alien civilisations (crashed ships, ruined cities etc.) but nothing concrete. Earlier this year, a player managed to trigger an Event. They were suddenly pulled out of hyperspace, and were confronted with a massive alien ship that proceeded to scan them and then warp away. This Event went viral: aliens were confirmed to exist in the game, and the game had been out for several years and nobody had ever come across this Event before.

The story for Elite Dangerous is event based. It requires the player to do certain things and explore certain areas which will then trigger events that further the narrative.
This is the style of story that I would like to use in my game. The player will be exploring and then may stumble across an area that will then trigger an event, for example they could encounter the Unseen for the first time, or maybe find a huge spaceship that will tell them where the Unseen came from, or something like that. As it is an open world exploration game, the story should rely on the player actually exploring and visiting locations that will further the narrative.

Overall then, I have found several different influences that will help me write the story for my game. I know already that the story will revolve largely around the Unseen, and the Doctor Who research has helped to convince me to keep as much of the Unseen a mystery as possible, as it will intrigue players and will also make for an interesting story. Some parts will be told (for example how they arrived on the planet) but the Unseen will mostly be a mystery.

The narrative will also be event-based: it will require the player to explore in order to continue the story. For example, reaching one of the pieces of the spaceship may trigger an event and an Unseen will appear. The player will then have to decide what to do( i.e. run away, try to fight it etc.). There will also be several story-based locations that will incorporate some of the main mechanics into the story (such as stealth and the pickupable items) as this will encourage the player to explore more in order to find items to help them advance the narrative.

The story will be fairly linear, as I think in an open world exploration game this might be best. Giving players too much choice can be an issue, and since the game is event based the player can already choose what parts of the story to do at certain points. Giving them a choice of how that event unfolds makes the story very complicated and possibly too open, as some decisions need to be made for the player in order for a story to be told. The narrative therefore will be largely linear, but it will also contain choices that the player can make to influence some parts of it.

The various elements of the game’s story are now largely in place. I just need to write it.